NMC Great Lakes Water Studies student Chris Horvath is in Iceland this summer on a Marine Advanced Technology Education Center (MATE) internship aboard Columbia University’s research vessel the R/V Langseth, doing research on the Mid-Atlantic Ridge.  Chris is sending us periodic blog posts to update us on his adventure.  You can read the rest of them here.

Contrary to popular discussion overheard in the galley, there is a point to all this drifting and isolation.  We are here to affirm assumptions from lands far away.  To stand firmly on ground never before tread upon – so to speak.  To discover the secrets of a land not yet explored.   At least so I’m inclined to believe.

My job is fairly straightforward.  I stand watch over the scientific equipment collecting various types of data by monitoring the computers designed to record the data in real time, and help troubleshoot and launch the equipment required to retrieve said data.  I suppose a brief walk-through is in order to fully understand what we are collecting and how it can be considered accurate and true.

We are here to map, analyze, and determine the differences in how the earth’s plates are interacting south of Iceland along the Mid-Atlantic Ridge, in an area known as the Reykjanes Ridge.  To quote the Project Summary for per Hey, Ramirez, Hoskuldsson:

“The project is month-long marine geophysical expedition to collect the multi-beam, magnetic and gravity data that would provide a definitive test between the fundamentally different thermal and tectonic hypotheses for exactly how the Iceland plume caused the reorganization of the Mid-Atlantic Ridge south of Iceland.”

In layman’s terms:  When thermal and tectonic forces are acted upon this ridge, how do they interact over time and situation, and is there a pattern to this interaction by which we might change the perspective of the scientific community for how Iceland has formed and will continue to form in the future?

In the short term, this can have significant impact on Iceland’s economy.  You see, there is an invisible barrier around every country bordering a body of water touched by another country.  It is called the Exclusive Economic Zone (EEZ), and limits all commercial offshore activity within the zone to the country of ownership.  This is pretty darn important when you consider that Iceland is in the middle of the North Atlantic, about the size of Indiana, and only about 40 percent of it is reasonably inhabitable.  It’s so important that the country’s governing body for all things related to geology, geophysics, and plate tectonics sent a representative (his name is Sigvaldi) on the Langseth to develop a case for Iceland to expand its EEZ to include the Reykjanes Ridge all the way southwest to our survey location and beyond.  This would be a huge development as Norway, Scotland, and Denmark all are looking to exploit these waters for their potential as sites with huge deposits of oil and heavy metals, fishing, shipping routes between Europe and Greenland/Canada/US, strategic military advantages, and (to a lesser degree) whaling. 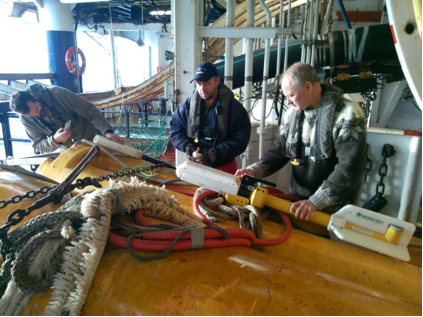 The first type of data we collect is magnetic, and we do this by deploying a tethered Geometrics G-882 Cesium Marine Magnetometer.  “Maggie”, as she is affectionately called, resembles a stinger missile with a bonnet on her noggin.  She is launched from the Main Deck, Starboard Aft of the Stern, by at least two technicians:  One to apply the Van Sumeren technique of “gently” heaving her overboard; the other to man the hydraulic winch, which spools out the designated 200m of powered cable.  Due to our optimal surveying speed over ground of 10.5kts, she rides quite high in the water as she measures the magnetics being emitted into the water column.  This is done by recording the changes in pressure that occur in a Cesium vapor vacuum-sealed cylinder within Maggie.  Typically she is reading the magnetics from the earth’s crust some 1000-3000m (3000-9000ft) below where she rides in the water column.

The Earth is magnetically polarized, like a battery, with a positive and a negative point existing typically near the North and South poles.  Over time, the magnetic field surrounding the Earth can swap polarity, and has done so since its inception with little fanfare.  Newly created or recently exposed crust will take on the polarity characteristics relative to its proximity with the poles.  Over time, these values can diminish.  This constantly updated/recorded reading from Maggie can tell us two things when values elevate:  That there is thermal activity due to volcanism occurring that is creating new crust, such as in the deep trench located in the middle of the ridge where there are hundreds of volcanoes seen in a single pass of the vessel (we call this location the Axis, as pertains to the meeting of the Eurasian and American plates); or, when the values abnormally shift over locations outside of the Axis, where we can sufficiently determine that there has been tectonic reorganization occurring, which leads to much older layers of the Earth’s crust being exposed next to relatively new ones.

Maggie is a delight to work with when she is attached to the boat, but is temperamental with heavy seas and high winds and attempts to retrieve her must be done in the worst and most dangerous of conditions.  I say attempts because after retrieving all 200m of cable early last week when we stopped getting magnetic data, there was no Maggie.  $20,000 in the drink.  Luckily we had a spare onboard, but should this happen again we would be unable to record this very important data.  So, when storms sweep through, we pull her out of the water. 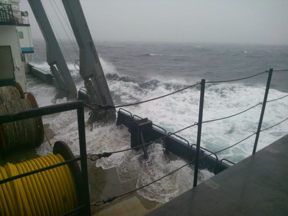 Side note on storms, of which we have weathered three major systems.  Last week there was flash flooding, baseball sized hail, and 60+mph winds back home in Traverse City.  On average, storm systems take between 3-6 days to reach us, and those that pass through the Great Lakes are almost guaranteed to head right for us after leaving North America.  It’s not so much the precipitation that we worry about, but the high winds.  That same storm system hit us strongly a day and a half ago, resulting in sustained 50kn winds and waves as large as 9m (30ft!) until early this morning.  Because of the length of time of said winds, we are projected to have 4-6m waves for the next four days – uggggh.  That means everything you care about needs to be strapped down, walking down hallways is a workout, and sitting in a chair during watch can be hazardous to your health.  That also means sleeplessness and seasickness rear their ugly, conjoined heads.  It’s best to sleep wherever you can whenever the moment takes you; be it barricaded (taco’d) in your bunk, in the movie room, or even in the main lab (though, sleeping during your shift is highly frowned upon).

The second type of data we collect is gravity.  It is far less elegant and far more complicated than magnetic.  In the main lab there is a Lacoste & Romberg G237 Gravimeter, basically an encased gyro with various sensors measuring roll, pitch, heave, as well as several other values, and most importantly the strength of gravity in a given location of time and space.  The data is constantly being updated/recorded and helps us determine one of two things:  Either the thickness of the Earth’s crust; or, the density of the materials that make up the layers of the crust.  Combined with a extremely low frequency sonar system (called a Sub-Bottom Profiler) and core sampling, can provide an incredibly accurate picture of the geology and geomorphology.  Unfortunately, the latter requires that we stop moving and, due to time constraints from bad weather, has been scrapped for this cruise; and, the former (our Knudsen 3.5kHz Sonar) had to be turned off when the bottom became drastically uneven, providing poor quality data, and also operates at a frequency that can cause problems with our EM122 Multi-beam Sonar used for Bathymetric data. 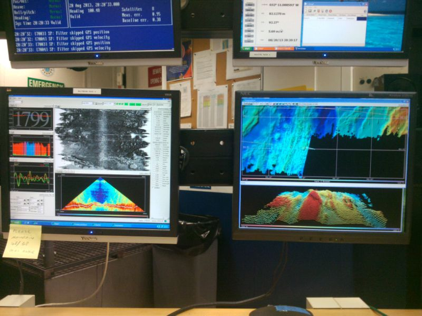 Which brings me to our third type of data, the one I was trained in at Northwestern Michigan College, and consequently the reason why I was selected to be a part of this cruise:  Bathymetric data.  This is collected using our Kongsberg EM122 Multi-beam Sonar operating around 12kHz.  The sonar has an encased piezoelectric crystal that vibrates hundreds of thousands of times per second when electricity is applied to it, sending out that energy in the form of measurable acoustic pulses.  These pulses reflect off targets in the water column and return to the sonar where they are “heard,” and provide us with an accurate measure of depth in a given point on Earth.  As with the prior two systems, knowing our geographic location on Earth is essential to collecting accurate data; and, they are all integrated with our multiple GPS/Satellite-based positioning systems located at unobstructed points on the top of the vessel.

The more depth measurements we can collect with each ping of the multi-beam the more defined picture we can see of the shape of Earth’s crust.  This is by far the most interesting data to stand watch over, as it is projected on the monitors in a three-dimensional (and very busy) display.  Not only are we keeping an eye on the 3-D Terrain Modeler, but also the 2-D Geographical (Seafloor Map), the black and white 2-D Seabed Imagery, the convoluted water column display (which provides us with backscatter data – used to see thermal activity in real time), and various readouts of motion and sound velocity which help determine the quality of data being collected.  Sound velocity (or the speed of sound in water in this context) is extremely important as its measure allows for us to calibrate the sound pulses on the fly so that they return to us in a straight line rather than with a bend (which would give the illusion that the distance to the bottom is longer/shorter and in a different location than it really is). 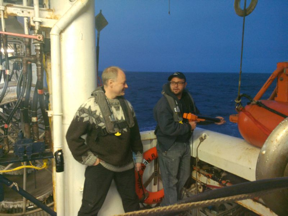 We take measurements of sound velocity on this cruise by launching XBT’s manufactured by Lockheed Martin Sippican.  It is a bullet-shaped lead weight attached to two thin copper wires within a plastic mortar tube that is released from the streamer deck.  Those wires are linked to a powered cable that connects to the lab, where measurements of temperature, salinity, pressure, and depth are recorded.  Typically, we use the T-5 model which is rated to 2500m.  It falls quite rapidly and within five minutes has reached the end of its wires, whereupon the wires are severed and the probe lost to the deep.  Two important things to remember when launching an XBT:  First, don’t let the wires touch any metal or it will short out (everything is metal on a boat); and second, don’t fall overboard!

Thank you for bearing with me in this blog as I delved into the depths – so to speak – of what I do while working aboard the R/V Langseth.  Future entries will cover the leisurely options I have to pass the time.