Alex Bondar and her team, “the Batatas.”

Alex Bondar will be a junior at Western Michigan University in the fall of 2015 and currently works at the NMC Student Life Office. She earned her associate’s degree from NMC in general studies and hopes to receive a degree from Western in education with a focus in English.

I grew up in a small town near the thumb of Michigan – Armada, with a population of less than 2,000 people, mainly white and mainly Christian. My only experiences in life were from Armada: you know everyone you see every day, that any trip outside of town was a brand new adventure, and that the idea of traveling the world is an almost impossible feat. Never did I ever think I would move to Traverse City a year after I graduated. But, after my first year of community college and at 19 years old, I moved 4 hours north to the Cherry Capital.

Enter Student Life, the first job I got when I moved to TC. It was a great way to get to know people since many students enter our office every day. Across the hall is the International Services and Service Learning Office, where Jim Bensley works. Because of our free coffee, many more than just students entered our office. Jim was one of those people. I got to know him and what he does, and that’s when I first heard the word: Brazil.

“Brazil needs you!” Jim said one morning to me, completely out of the blue. I had thought he came in for some free coffee and to say hi. Apparently, that wasn’t the case (although, his mug was filled when he left.).

“Brazil?” I responded, confused. Why would Brazil need ME? I’ve never even given that place a thought… I was thinking as Jim was talking.

“Yes! They need you to teach English!”

NO. WAY. Surprise came over me as my major was, in fact, English teaching. I had never thought that I would have the chance to get into a classroom so young, and so early… and in Brazil! The program was called US-Brazil Connect, a way for community college students to study abroad in Brazil and teach English to high school students. Although, I was still wary. I knew that any travel costs would be crazy for a college student, and I was then set on using any money for travel towards Australia. I told Jim I would mull it over, and I went home for the weekend.

You know those moms that are just super cool? The kind that raise you right, but still try to get you everything? Yeah – that’s my mom. The “cool” mom. Well, I approached her about the situation. I told her I was unsure. She told me that I was silly for doubting, and that this is a once in a lifetime experience. Then, she said the magic words: “I’ll worry about the cost. You just go have a good time.”

That’s when I knew that this was no accident. Everything seemed to fall in place. It seemed almost like divine intervention to me. How did I get so lucky? I decided to go with it.

When I first met my students over Facebook and Google Hangout video chats, I knew I made the right choice. They all were so diverse and had amazing personalities. What was cool about the students is that we all had special connections. I felt like I was responsible for their futures – the success they had with me as a coach would determine their success in the future (well, maybe not, but I felt like it). And every week, I could see the progress happening. Instead of using basic English, they started to use more advanced language and even incorporated slang. I couldn’t believe it!

When July came along, I was more nervous than ever. As a Type 1 Diabetic, traveling was always stressful. But then – at 19 years old – I was to travel across the world to a foreign country for a whole month. And I only knew um pouco (a little) Portuguese, so that seemed even scarier. But I had come this far, and I wasn’t going to stop right there.

Landing in Brazil was like a movie. As the plane got closer to the ground, the hills and trees seemed to reach up to the sky. And, since Salvador is on a peninsula, the ocean was visible. And it went on for eternity. Once the plane hit the ground, all of the stress went away. This wasn’t no Canada or Mexico trip – I was thousands of miles away from home and in a completely new world.

We were lucky, our team Salvador; we got to stay in a hotel the entire trip. Hotel Cocoon, a bizarre hotel with a space theme, eventually became our Brazilian home. My roommate was an angel named Maddison Reilly. Little did I know that she would become like a sister to me.

The school I taught at – SENAI CIMATEC – was a 10 minute bus ride away from our hotel. It was cool being so close to everything; something I was not used to while living in Armada (the nearest McDonald’s was 20 minutes away by car). The bus ride took us along the oceanside, so every morning ride to work was beautiful. Our first day there, all of the coaches were surprised with a huge welcoming ceremony! There was live music performed by the students, Baiano food (Baiano meaning “from Bahia”), and plenty of love to go around. We danced, sang, and finally got to meet our students in person. Easily one of the best days of my entire life.

The days at SENAI were incredible. From 8 am to 9 am, I taught a group of students with more advanced English understanding. These students were known as my EFL students. And then, my Project Based Group, my original students, from 9 am to 11 am. Because of one of my first Portuguese words being “batata” (in English, “potato”), we decided to call ourselves the Batatas. And after 11am, it was lunch time at the school. The coaches got on the bus and traveled back to the hotel at 1 pm. It was a nice schedule to follow Monday through Friday, and I got used to it real quick. 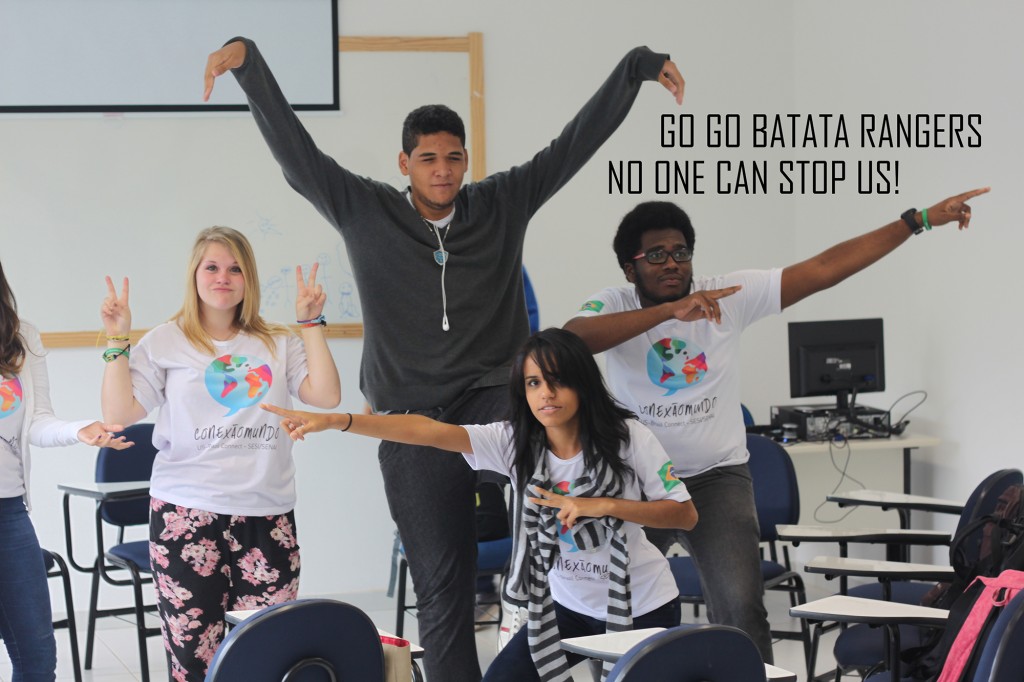 Some of the activities in class were just fun and games!

What did the classroom days look like? Well, I refused to be a “worksheet teacher.” When USBC put us through coach training, they focused on non-traditional ways of learning through a variety of activities. I used that to the best of my ability. I oftentimes had the students start out the day by answering some questions left on the board via lined paper; we would go over answers in class and discuss. Sometimes about grammar, other times about culture. We spent a majority of the day playing games. Games that I liked to use in my old Improv student group, like “Park Bench” and “Party Quirks.” While they may have different rules, these games were all, essentially, fill-in-the-blank games, where participants have to use their quick thinking to figure out what the dialogue would be. For my students, it was perfect because they had to quickly use English. While they knew English very well, advanced English was where they had trouble. By using these games, they were forced to think quick. It was incredible seeing the way they would change their dialogue during the games from Week 1 to Week 4 – it was a noticeable difference in each student. And, being so close to the other coaches’ classrooms, I was able to create bonds with other students. These are bonds I would never forget.

From going out and about with the coaches, teaching at SENAI, exploring Salvador with Maddison, and lazy days in the sun, I was becoming extremely comfortable with the idea of living in Brazil. I mean, I have a lot of crazy thoughts, but moving to Brazil had to have been one of the craziest. Although, it was hard to think of my future when I couldn’t imagine my life being this great once I returned to the US. I was working my dream job in a foreign country where I felt like I belonged. I did my best to soak it all in.

While Team Salvador had many outings, my favorite one had to be to Barra with Maddison. Yes, I’m a people person, but having one-on-one time with my roommate was especially important to me. Barra is one of the nicer parts of Salvador; known for being where Carnaval is held every year, it is an area that follows the beach and leads to a lighthouse known as Farol da Barra. There are very nice restaurants, shops, and incredible views. Maddison and I were especially drawn to the lighthouse. You were able to go behind the lighthouse and gaze at the ocean. The waves crashing below, the boats floating away, the surfers colliding with the sea… it was pure heaven. If I could show only one place from Salvador, Barra would be it. 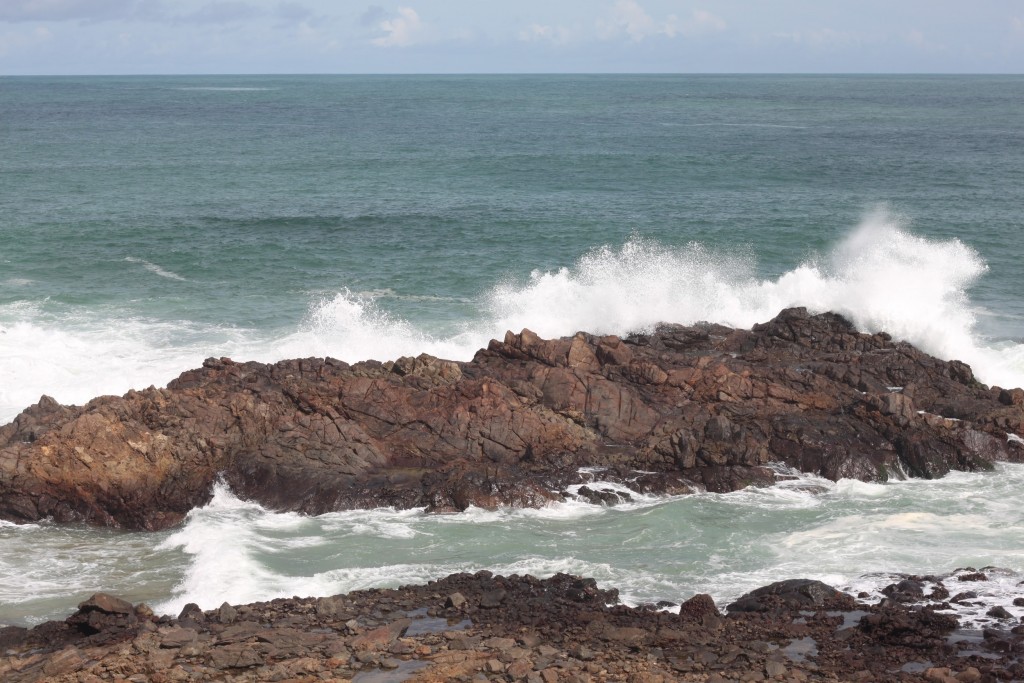 The waves crash against the rocks behind Farol da Barra, Salvador, Bahia.

By the end of the program, Brazil meant more to me than I ever thought anything ever could. The last day was the most emotional day of my life. I told my Batatas that I would start saving and try to return in February, but, truth is, I didn’t know when I would return. I wasn’t even sure how I would save up the money. But I had to return. We stood in a circle in front of the bus, crying and hugging. I gave each student a long hug and a few words. These weren’t my students anymore – they were my best friends.

I knew I had to come back. And I found a way to make it happen.