NMC’s Keith Kelly with an update on the successful Startup Weekend Traverse City held on June 13 at the NMC Parsons-Stulen Building.

The weekend was a success with about 40 participants working in teams all day and night at Parsons-Stulen Building.  The final pitch including both product, service, and business plan was Sunday evening at the Hagerty Center.

NMC was well represented with two ET students working with other members from Oakland and U of M (7 total) to create an integrated ground control station. Shown here: 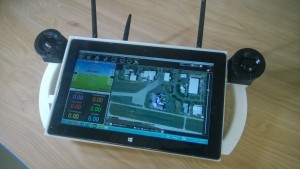 Most Startup Weekend pitches focus on software development. Having a piece of functional hardware produced over the two days was unique and  was only possible due to the investments made by NMC in Maker’s Bay.

The winning project was DockSlip, an app that allows boat dock and slip owners to lease them out to the public. The NMC led project was certainly a contender for the winning spot but judges shared that the business must be able to be implemented now.

I think FAA regulations were a concern with the UAS service and hardware project. A video crew from Denver was working all weekend to document the story. I’m hoping they’ll be able to share their final production. Here are videos of Maker’s Bay projects of two of our NMC students.