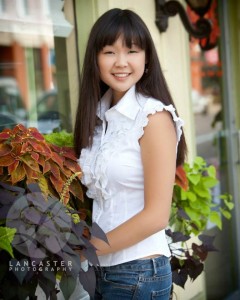 Back then, Chung was planning on medical school, so getting a head start on college credits sounded appealing. She took Freed’s advice and enrolled in a few more classes at NMC. Enough to earn her associate’s degree while still in high school, in fact. Now 17, Chung was awarded both her high school diploma and her associate’s from NMC last month.

But a funny thing happened to the daughter of a doctor’s med school plans on the way to her diploma and degree.

“Three years later I am no longer sure of that path,” Chung said. “Trying to get this associate’s degree exposed me to classes and experiences I wouldn’t have had otherwise.”

With the underwater archaeology class, Chung traveled to Wales last summer and headed a survey project.

“It was completely non-medicine related and I had a lot of fun,” she said. She calls World Lit “one of the most interesting classes I’ve ever taken.”
Already admitted to the University of Michigan, Chung is awaiting a decision on her application to Yale University before she makes her college decision. In the meantime, she still plays cello with the Central orchestra, preparing for a performance at New York’s Kennedy Center in March; works at the Grand Traverse Pie Company and as a lifeguard; interns at the Women’s Resource Center; teaches creative writing at Central Grade School and helps her mom Karen start her new business.

Wherever she winds up and whatever she chooses to study, her former counselor is confident she’ll continue her track record of accomplishment.
“She’s an incredibly bright young lady, incredibly motivated, and a really neat kid,” said Freed.

Emerson agreed. Chung completed an honors project in his class, he said, and “couldn’t get enough” of the challenging authors presented, presenting yet a third potential career path. So enrolling in a bachelor’s program with an open mind as far as major—the classic definition of a liberal arts education—is an option Chung is suited for.

“I think that’s in some ways ideal for a student like Jami,” Emerson said. “She has so many opportunities any way she goes.”
Freed, now retired from Central, said during his 15-year career Chung was the fourth student who simultaneously earned a high school diploma and an NMC degree. He said he’s a “big proponent” of dual enrollment. Earning a degree like Chung may be rare, but by taking even a few college classes in high school, many students can trim their tuition bill later.

“It was a good opportunity for some students to make sure they continue on a college track,” Freed said.